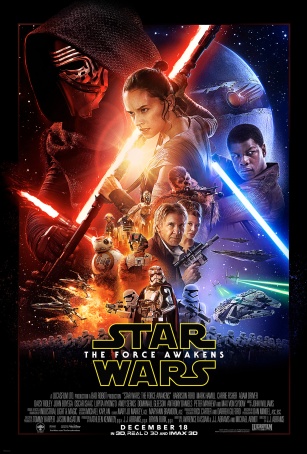 No need to scan the internet any more for The Force Awakens story leaks. This is what is going to go down.

In a galaxy far-far away and 30 years past, there is a young storm trooper and Tie Fighter fighter pilot battling for the resurging galactic Empire. His name is Finn. He was raised to do “One thing” but has nothing to fight for, at least as a Storm Trooper. Someone wants Finn to be more than just a storm trooper. The Empire senses he has great potential. Finn turns out to be indecisive not knowing exactly how he fits in any way he turns. He decides to go AWOL from the Empire in search for of a meaning of his life and lands on some desert planet.

Finn meets Rey, some sort of scavenger on this desert planet. Rey doesn’t live for any purpose in life, she just excels in taking care of business at hand no matter how difficult. She is decisive and confident. It is here where Finn gets his light saber, a scavenged object found by Rey in an old ruin.

The Empire finds out where Finn is hiding out, perhaps they know he holds some sort of affinity for accessing dormant powers. Finn and Rey are forced to abandon her home and end up on the run. The talk of all this Force stuff and bringing back the dark ways seem so mythic to the young ones but they do know their lives are in danger.

Finn and Rey seek out refuge and they find her father who turns out to be Han Solo. Rey has all of Han’s short sided problem solving skills. When the going gets tough, Han hands her a retro looking blaster which she uses repeatedly to repel the enemies that are chasing them everywhere they go.

From Finn’s first hand account and Han’s past experiences, they know that a new dark lord has arisen to bring back Darth’s legacy. He awakens the force and every sage in the galaxy gets all upset. The Empire is back and kicking butt. They have scoured the legends of the Old Republic, the Jedi, and Luke Skywalker from the history books and made them out to be legends with a darker side.

Han then tells them the old stories about the Jedi, Luke Skywalker, and Darth Vader. They are skeptical and ask if it is really true. Han says, “It is true, all of it.” The fact that the Empire is bent out of shape over one AWOL Storm Trooper seems a bit odd which leads them to believe that Finn is a very special person with his limited abilities.

Meanwhile Kylo Ren is fully in power and makes a decree to the dead Vader that nothing will stand in their way. Vader’s image inspires Kylo Ren and he embarks upon a mission to find the renegade storm trooper fearing the young man’s potential.

Finn meets some mystic personality who asks, “Who are you?” During the conversation the voice says, “The Force has fallen to you.” Then and there, it is obvious that the Force is strong in Finn and only he can face this new Dark Lord. The main problem is that all the Jedi are dead, even Luke.

They travel to the planet where Leia resides and she is no longer a Queen. Her position has been relegated to a status symbol of a lond dead myth of the old Republic. After the destruction of the original Empire, Luke was in an accident and died, so the legend goes. Lei has no other information nor any power to lend to the fight other than a small band of fighters that are loyal to her. Thus there is no one that can train up Finn to be a Jedi. However, Han has this gut feeling that he didn’t really die and they need a Jedi really bad.

Han only knows one thing to do. The Millinium Falcon warps through the galaxy on a mission to find answers. During one of their stops, Kylo Ren confronts Finn and Finn is nearly killed. Rey and Han create a distraction and allow them all to escape by way of the Millenium Falcon.

Luke was nowhere to be found but a clue they found on the planet leads them to another planet where they search and find an old hermit that tells them that Luke was there at one time but died. Their hopes are dashed. The mission has failed. The galaxy is doomed as a new Death Star is being completed to destroy worlds that don’t comply with the new leadership.

Before they leave, the planet is attacked by a host of Tie Fighters and other bombardments. The planet is under full assault as they look upon the destruction and attempt to help save the small planet. At the last moment, Han tosses Finn a light saber he had been hiding the whole time and tells him, “Go for it son. You were born to do this.”

Finn jumps in and slays some storm troopers and then is overwhelmed and forced into a forest where he confronts Kylo Ren. Kyloe is impressed by Finn’s natural abilities where his mask is knocked off in a fight but Finn is no match for the Dark Lord. Kylo Ren attacks and has Finn in a compromising position but at the last second, Luke Skywalker jumps into the scene with his own light saber and surprises him. Luke disarms Kylo Ren but the Dark Lord has a nasty trick up his sleeve and escapes to fight another day.

Kylo goes home where he regroups and Darth Vader appears in an illusion and vows to help Kylo and give him access to even more power than he had before.

The invasion is repelled and the old clan is reunited with the new players on the scene. Finn has “One thing” he needs to do real bad, confront and extiguish Kylo Ren. Luke agrees to train Finn in the ways of the Force but will there be enough time before Kylo Ren discovers their whereabouts once again and comes calling.

A native of rural SW Oklahoma, I currently write swords and sorcery fiction which I publish in electronic format on Amazon. My interests and hobbies include shooting, riding motorcycles, fishing, watching college football, playing games, and most of all, spending as much time as possible with my better half, Kathy. I hope you enjoy my blog and that it might lead you into my fantastic worlds of swords and magic. -J. Wade Harrell
View all posts by J. Wade Harrell →
This entry was posted in Movies, Wade's Musings and tagged Leaks, Plot, science fiction, Star Wars, The Force, The Force Awakens. Bookmark the permalink.