(Click this link for a complete bibliography of ebooks from J. Wade Harrell Fantasy) 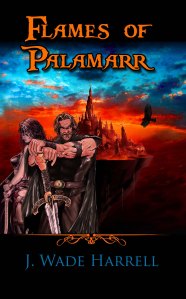 Flames of Palamarr (novel not yet released)

After “Shadows of Siernod”, Fist La’brau finds ways to fill the void in his life left by the horrible consequences of his dauntless deeds through seven volumes of novelettes and novellas. Some months or perhaps a couple years have passed and Fist finds his legend has ebbed in a debased and humiliating condition. While simply trying to forget his past it seems he becomes haunted by ghosts and tormented by an ambitious warlord. Fist is challenged with the task of escaping his demons in The Legend’s Ebb and vault himself back into a world in need of a hero.

Beyond the kickoff novelette, Fist must continue to fight his demons and determine if he is willing to champion the new causes for the fate of Siernod. But all this comes after a stint of being lost after entering a bizarre world marooned in Limbo. After finding his way out, he still must trek through a destroyed realm in order to attempt to find his way back to Siernod. It seems that the eternal flames of Palamarr are waning threatening the existence of both Light and Shadow. Who could be depleting both the eternal powers in the universe? Will Fist consent to the task? Will Light and Shadow–and the universe itself survive the necrotic disease that seems to be eroding the foundation of the cosmos? These are questions whose answers unfold as the stories of “The Flames of Palamarr” continue.

All seven stories are available in Kindle format through Amazon. The paperback novel is slated to be released in the not too distant future. 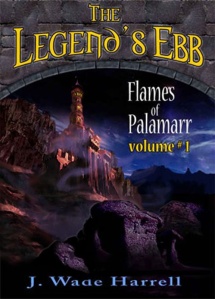 We discover Fist La’brau has not fared well since the costly conclusion of “Shadows of Siernod”. He now basks in strong drink and is haunted in the alleys of one of the realm’s most ruthless cities. Is there anything that can save him from his new-found state or is his legend destined to lie in the hands of bards? Perhaps the challenge of a menacing warlord or a ghost form the past might have a shot. One thing is for certain, beware of bottomless pits oozing with demonic haze and dark dungeons filled with fearsome instruments of pain. The Legend’s Ebb brings us a dark story of a man filled with bitter memories and terrorized by the worst horrors he can imagine. Only the mightiest of heroes would have a glimmer of hope.

The Enchantress of Limbo

The Enchantress of Limbo

Fresh off an incredible turn of events, Fist is bounding across the rugged hinterlands of Gog with a new acquaintance known as Lyrum. Together they hope to find a fresh start in the realm only to be jilted by Fist’s curiosity. Upon entering a tent in the middle of deserted lands, they find themselves thrust into the jaws of Limbo and in the company of a strange enchantress. Limbo holds many secrets and Fist, always curious, is determined to get to the bottom of them. Among the secrets is the fact that Shadow is the flames of Shadow or growing stronger than the flames of Light signifying something sinister at hand in the cosmos. The two travelers uncover mysteries of the bizarre world but wonder if they will ever be able to return to Siernod. 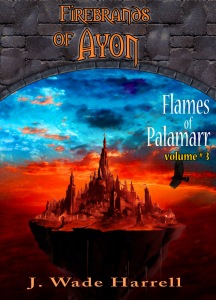 Rebounding from their ill fated visit into the tent of the enchantress, they journey on by stroke of luck. Unfortunately they still have their work cut out to find their beloved Siernod. They find themselves in a ruined realm the inhabitants call Sechdomayhn that has been so badly scarred by fire and Shadow that the denizens have mostly taken to the sky where their cities float a mile above the realm’s blackened floor. Water is more precious than gold and vile guild bosses jockey for power with kings. Fist and Lyrum find themselves in conflict with one such boss and must embark upon a mission to repay a favor but their task will enact the ire of one massive thug. Packed full of action, Firebrands of Ayon is an action odyssey that flings our heroes through a dark labyrinth and into a battle a mile high.

Theatre in the Ruins 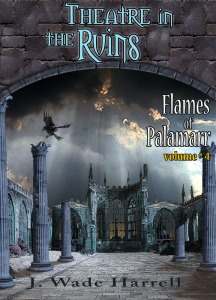 Theatre in the Ruins

Fist becomes closer to the woman who saved them forming a trio of rebellious sailors upon the skies of hope as they search for other cities where they might find a gate back to Siernod. Theatre in the Ruins is a fantasy opera in which the actors are most unwittingly caught up in a theatre of events that is full of twists and surprises. A sadistic sorcerer uses his subjects in ways they could never realize while Fist hopes he has finally encountered the savant that can conjure a gate back to Siernod but as the flames of light has waned, they need a powerful stone to aid the cause. This only to find that they are the subjects of a grand tragedy upon the world’s stage.

Ghosts in the Mist

The story continues after the resolution of secrets and desires that unfolded in Theatre in the Ruins. Looking for amber, the one thing remaining to fuel a gate to Siernod, Fist and Lyrum are on a mission. Fist’s resolve is once again tested all the way with one event after another fueling his ancestral rage to provide the strength needed to defeat the obstacles they encounter. They must fight barbarians, encounter tentacles of lava, engage in aerial battles with ghost ships, and eventually enter the mist of the spirit world where they encounter ancient evils in their search for the golden stones of power they most desire. Only their drive for their much wanted return to Siernod keeps them going, but could the evil in the mist be even more than Fist can handle?

Embarking upon a ghost ship to escape the mist of the spirit world, Fist and Lyrum find a new city hanging in the clouds. It is there that Fist falls off the wagon and resorts to his old betraying habits. Drinking and brawling gets him into trouble and the law will have none of that from an outsider. Fist’s biggest weakness lands him in chains where his rage boils. In the meantime, Lyrum tries everything he can to seek the release of his friend but the captain of the ghost ship is bent on departing soon leaving him little time to work out plans. Desperate and enticed by a sinister woman, he falls into her lair hoping that she might have some means of seeking a release for Fist. Again, the rise of the flames of Shadow are reinforced as Light is waning causing concern that the city could fall some day. Lyrum is tight lipped and seems to be veering from the plan enjoying all the pleasures her tower has to offer with a visit every evening. It turns out her tower holds some answers but Fist is chained and locked deep beneath the city. It becomes evident there is amber beneath the city if Fist can be rescued and they can get to it. What would happen if everything came unchained? 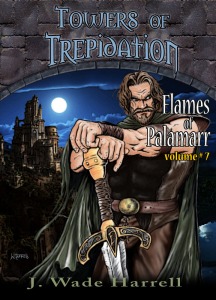 Towers of Trepidation is the finale of “Flames of Palamarr” where all questions are fulfilled. Fist and Lyrum seek a gate back to Siernod as they drift eastward toward a long forgotten city named Xu-Zen hoping the wizard said to live there can give them what they want. What they find is not quite what they expected. An unexpected passenger they get along the way adds to the obstacles they must overcome. The city turns out to be more than what they could ever imagine filled with specters and slamming doors. The story comes full circle when they encounter the past and learn the secrets of the changing of the flames of Palamarr. The irony threatens all hopes to return to Siernod and Fist is less his fueled rage which seems to have faded and the battle against a caster of the blackest magic must be fought with his everyday vigor. It is the final moment and the resolution will be simple. Siernod or Shadow.

1 Response to Flames of Palamarr