Review – The Sword of Welleran

When studying the history of fantasy fiction, one’s path will usually lead back to this classic short story written by a master of the English language. So inspiring was this simply plotted microepic that many other well respected writers of the twentieth century attribute their work to this story. Why do they do so? Perhaps because Dunsany’s insight of having served in war and his remarkable command of the written word allowed him to craft something that stunned readers when it emerged in 1908 and all throughout the twentieth century even til today. 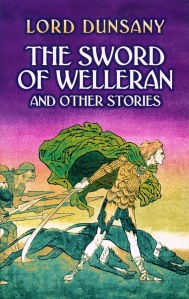 The Sword of Welleran

So why have so many writers all throughout the twentieth century including such names as  H. P. Lovecraft, J. R. R. Tolkien, Michael Moorcock, Robert E. Howard, Arthur C. Clarke, Ursula K. Le Guin, and many others drawn inspiration from Dunsany? Well, when someone does something original and brilliant, it is often wise to learn from their success and that is what so many have done. Horror master H. P. Lovecraft was so impressed with Dunsany that he drew upon him for many of his “Dream Cycle” stories as much as he did Poe on other works. Perhaps the most popular creator of fantasy of all time, J. R. R. Tolkien is believed to have been inspired by Dunsany to some extent and the intellectual styles and high fantasy tones have a similar ring.

So looking at “The Sword of Welleran”, perhaps the most important contribution to fantasy that Dunsany ever wrote, we see the making of something original and monumentally epic though the story is only about 10,000 words in length. The story begins with a flattering description of perhaps the most extraordinary city in Dunsany’s desert setting, Merimna. The city is dazzling and rich in history and has the reputation of being defended by the world’s most incredible heroes who come into action when threatened by outside forces. Those heroes are legendary and their reputation and statuesque images strike fear into the hearts of foreigners who even glimpse the marble effigies.

For hundreds of years the city sat peacefully while its heroes lay perished in a mountain chasm, at least believed. However the marble statues are enough to thwart even the thought of aggression toward fabled Merimna. Welleran and his heroic companions had not been in action for many many years but one young warrior longs for their existence. Rold visits the heralded artifacts that include Welleran’s red cloak and his curved sword and wonders of the old heroes would ever return from the chasm if their services were needed.

While the citizens of Merimna grow lazy and apathetic, enemies send spies to see if Merimna is indeed guarded by the heroes of old or if their statuesque images that are so lifelike are real or stone. The fear of the city by outsiders was so great that the only one that dared do the dangerous deed were criminals who were promised freedom from their doomed bondage.

The statues are reported as such and war is inevitable. What is Merimna to do if the statues do not respond, if the spirits of the heroes including Welleran remain in the chasm? Rold visits the sword encased in glass and the spirit of Welleran meets him and encourages Rold to take up the sword and he does so. The spirit of Welleran becomes one with Rold and as the army of the enemy prepares to attack, Welleran is alive in Rold who now has sword and cloak and rides into battle. The sword hacks a bloody path through the army slaying everything in its path with ease. The sword glows and dooms the spirits of the enemy.

“And now the armies had come very near. Suddenly Rold leaped up, crying: ‘Welleran! And the sword of Welleran!’ And the savage, lusting sword that had thirsted for a hundred years went up with the hand of Rold and swept through a tribesman’s ribs.“ The sword seems alive, sentient, and almost evil thriving on war and death. It seeks to devour the souls of enemies and take as many lives as possible. The hands that wield it feel empowered to do deeds that no other man can do, to slay an entire army with simple strokes of the hungry blade. And so it did and Merimna was saved.

Yet when all is done, the hero Rold feels unfulfilled. He even fills disgusted at how victory was attained. There was no glory in victory as told by Dunsany. No matter how justifiable, the blatant slaughter of the attacking forces could not be enjoyed and it was questioned as to why such a weapon was entrusted to the hands of man.

From my angle, perhaps no other writer has taken more from the creator of Welleran than Michael Moorcock who willingly pays tribute to Dunsany for much of his inspiration. Moorcock has his own writing style that he developed while working on Tarzan stories in the 1950’s starting at the age of seventeen. But what I do see in the story that works its way into Moorcock’s? With his flagship character, Elric, we see a man who has low morals obtain a very similar weapon called Stormbringer. The appearance is different but in much the same manner, the sword is sentient, thirsty for the souls of men, and all powerful. In most of Moorcock’s work, we also see the use of the spirit of Welleran entering into another warrior’s body in the form of the Eternal Champion. Moorcock’s version if fully blossomed into a single identity who exists in many guises throughout all time and planes of existence. The way that Rold went from a principled man to one whose deeds left him cold is much the same way every Eternal Champion incarnation ends his story and thus is also why most begin their story with no memory of the past incarnation. In essence, I see Michael Moorcock’s body of work as a fully developed organism of the seed that was “The Sword of Welleran”.

So there we have the story written over one hundred years ago crafted by a remarkable mind that goes on inspiring generations of writers forever.

A native of rural SW Oklahoma, I currently write swords and sorcery fiction which I publish in electronic format on Amazon. My interests and hobbies include shooting, riding motorcycles, fishing, watching college football, playing games, and most of all, spending as much time as possible with my better half, Kathy. I hope you enjoy my blog and that it might lead you into my fantastic worlds of swords and magic. -J. Wade Harrell
View all posts by J. Wade Harrell →
This entry was posted in Fantasy, Review, Wade's Musings and tagged arthur c clarke, elric, eternal champion, fantasy, lord dunsany, lord of the rings, michael moorcock, moorcock, reading, short stories, sword and sorcery, ursula k le guin. Bookmark the permalink.